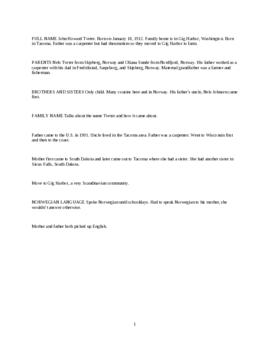 Howard Tveter was born on January 18, 1912 in Tacoma, WA to Nels Tveter and Oliana Sunde. Nels was from Skjeberg, Norway and Oliana was from Nordfjord, Norway. Nels came to America in 1901, living first in Wisconsin and then the Tacoma area, where he worked as a carpenter. Oliana first immigrated to South Dakota before coming to Tacoma, where she had a sister. After they were married, Nels and Oliana moved to Gig Harbor, which had a large Scandinavian population. As a child, Howard spoke Norwegian until he began attending school at the age of five, and his mother tried to keep the Norwegian culture alive in the family by celebrating the 17th of May and maintaining traditional Norwegian Christmas customs. Howard's daily activities included helping with the farming, berry picking, and his father's carpentry. Howard married a Yugoslavian woman, whose mother worked in the berry fields for his family. They had three daughters: Beverly, Kathryn, and Linda. Howard is active in the Sons of Norway and has visited Norway as well as Yugoslavia. He enjoyed the visit but is glad his parents came to the United States.