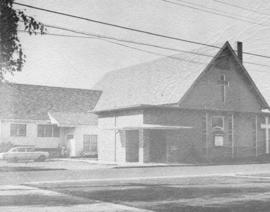 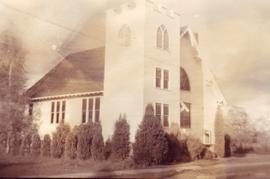 This congregation was organized under the direction of Rev. O. R. Sletten on September 2, 1892. The congregation built a chapel on an acre of land donated by one of its charter members, located one and one-half miles east of Canby. This chapel served until 1904, when it was sold, and a new church was built that fall. During the early 1900s a few Lutheran families arriving from the Midwest settled in the Barlow vicinity. Pastors Holden and Hagoes of the “Synode” Organization recognized the need for a church in the area. On November 18, 1901, the Scandinavian-American Evangelical Lutheran Congregation of Barlow, Oregon was organized under the direction of Pastors Holden and Hagoes. The congregation adopted the constitution then used by the Norwegian Synod. They bought a small church from the Methodists. Rev. Hagoes served until June of 1906, and Rev. A. O. White from 1906-1918. Then it was served off and on by neighboring pastors until the spring of 1919. The two Lutheran congregations bought an acre of land from James Erickson to serve as a cemetery. On recommendation of the Vice-President of the United Lutheran Church of America, the Zion congregation of Barlow consolidated with the Zoar congregation of Canby on April 25, 1911. The newly consolidated congregation then purchased a lot from Tom Mahlum, east of the city and moved the church to this location. Later, in 1919, the Scandinavian Evangelical Lutheran Congregation of Barlow also joined the Zoar Lutheran Church of Canby. Another congregation, Bethlehem Scandinavian Evangelical Lutheran Congregation, located in the Yoder area, also contributed members to Zoar. After a few years the Zoar church became too small and was in need of repair. In 1927 the congregation bought a lot south of the main highway in Canby paid for by the Ladies’ Aid. Rev. J. A.E. Naess placed the cornerstone of the new church February 5, 1927. The first services were held November 6, 1927, and dedication was on October 28, 1928.