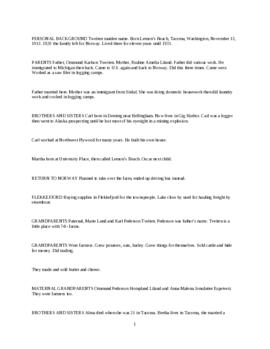 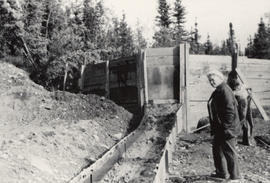 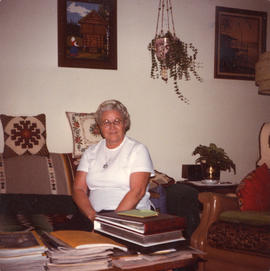 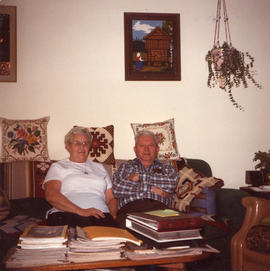 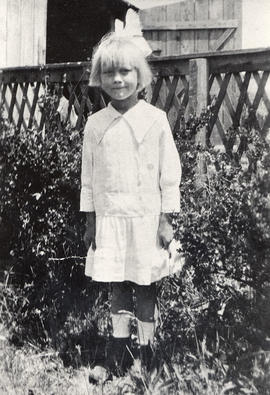 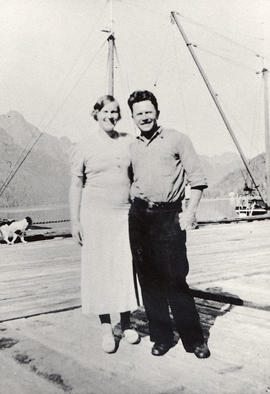 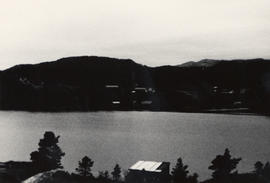 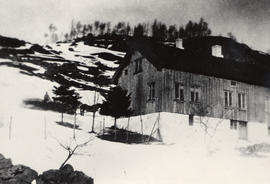 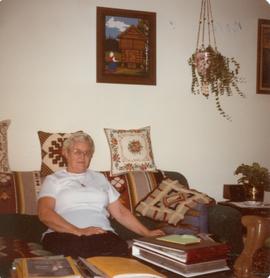 The interview was conducted with Anna Hopen on November 2, 1981 in Tacoma, Washington. This interview provides information on family history, immigration to Norway, school, Christmas traditions, return to the U.S., feelings about leaving Norway, work in U.S., marriage, children, community involvement, church, visits to Norway, changes in Norway, and Norwegian traditions. The interview also contains Anna Hopen's husband Anton's obituary from the Western Viking and photographs of Anna's grandmother's home in Espetveit, Norway, Anna's home in Norway, Hopen, Norway, Anna and Anton at Prince William Sound in Alaska (1936), Anna in Tacoma, Washington before her family returned to Norway, Anna and her brother Oscar in Fairbanks, Alaska, and Anna and Anton at the time of the interview. The interview was conducted in English with some Norwegian towards the end of the interview. Also see Carl Tweiten, Martha Handeland, and Anton Hopen.

Anna Malena (Tweiten) Hopen was born on either November 13 or 25, 1913 in Lemon's Beach, Washington, which is now University Place in Tacoma. Her parents are Ommund Karlson Tweiten and Pauline Amelia Liland. Her family moved back to Norway in 1920; she attended first grade in Tacoma and then continued school in Norway. After school, she spent two winters trapping ptarmigan, an expensive delicacy in England, and lived with Ingeborg Tveiten. Her brothers and sisters began immigrating back to the U.S., and Anna returned in 1931, traveling through Quebec, Canada to reach Tacoma. She did housework for various people before marriage, and she met her husband, Anton Hopen, at Normanna Hall in Tacoma during a snowball fight. Anton fished in Alaska in the summer, and they were married on May 21, 1936 in Cordova, Alaska. They lived in Alaska for three months and then rented a house in Tacoma. They have six children: Junis, Sigvald Dagfin, Phillip Obed, Alf Magnus, Ruben Harold, and Bruce Leon. Anna did part-time catering for parties after marriage and was head cook for Smorgasbord restaurant in Gig Harbor for thirteen to fifteen years. She joined the Daughters of Norway in 1932 and also belongs to the Sons of Norway, and she visited Norway in 1970, 1975, and 1979.